This is the small-sized Safeguard Multi-Catch Extender which measures  24"L x 3 3/8"W x 3 3/8"H. It has two (2) interior spring-loaded  doors and a hinged rear door for ease of releasing captured animals. The Multi-Catch Extender fits into a Safeguard one-way controller (#53120)  as shown, and its' purpose is to allow the multiple capture of squirrels  and allowing them to move "away" from the entry point so the initial  spring-loaded door is NOT BLOCKED. You can easily catch 2-3 squirrels in  one setting with the Extender. Can be used for gray squirrels, as well as  flying squirrels.

Setting Instructions: Fasten a Safeguard one-way controller (#53120) over the entry hole leading into a structure using the wings of the controller and washers with drywall screws as anchors. Slide the open end of the multi-catch extender into the open end of the one-way controller. It is advisable to connect the two units with a plastic zip tie or small pieces of tie wire. It may be necessary to run a wire from the top of the extender back to an anchoring screw on the structure for added stability. When squirrels are captured, you undo the zip ties or wires holding the extender to the controller and take the squirrels away to be released via the rear sliding door. Once all of the squirrels have been removed from the structure, remove the one-way controller from over the hole, and properly seal up the hole with hardware cloth, metal flashing, etc. 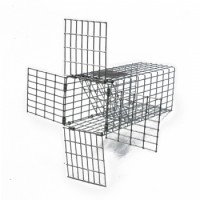